John Collier (18 December 1708 – 14 July 1786), the self-styled “Lancashire Hogarth”, was an English caricaturist and satirical poet who published under the pseudonym of Tim Bobbin. His first and most famous work, A View of the Lancashire Dialect, or, Tummus and Mary, appeared in 1746. It is the earliest significant work written in the Lancashire dialect, considered by later scholars to be “the closest surviving English relative of Anglo-Saxon”.[1]

Collier was born in Urmston, Lancashire, the third of nine children of John Collier, a Church of England clergyman (c. 1676–1739) and his wife Mary Cook.[1] He initially attended Urmston School, but his formal education came to an end when his father’s sight failed, and in 1722 he was apprenticed to a Dutch-loom[a]A Dutch loom was an early mechanical loom that enabled a single operator to weave several ribbons simultaneously, introduced into England in 1610.[2] weaver in Mottram. But “hating slavery in all shapes”, as he wrote later, he left after a year to become an itinerant schoolmaster, and in 1729 became assistant to Robert Pearson, the curate of Milnrow, near Rochdale, assuming the post of schoolmaster in 1742 after Pearson’s death.[1]

On 1 April 1744 Collier married Mary Clay (c. 1726–1786), a Huddersfield midwife with whom he had nine children.[1] Marriage and his growing family meant that he needed to supplement his schoolmaster’s income, and so he began producing illustrated satirical poetry in Lancashire dialect, and a book of dialect terms.[3][4] He also travelled regularly to Rochdale to sell his work in the local public houses, where he drew portraits of the patrons and their friends, charging on the basis of how many heads appeared in the picture.[3]

Collier died on 14 July 1786, “having lived heartily up to his own motto, ‘Laugh and be fat’ ”. His wife had died the previous month, and they were buried close to each other in Rochdale churchyard.[1] It is reported that he wrote his own epitaph twenty minutes before his death: “Jack of all trades … left to lie i’th dark”, which is inscribed on his gravestone.[3] 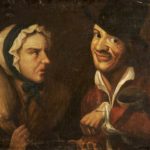 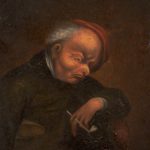 Man with a Broken Pipe 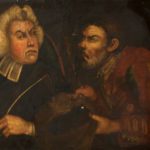 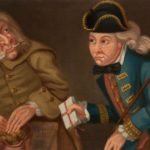 Two Figures, a Lord and a Moneylender 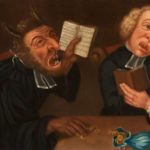 The Parson and the Devil 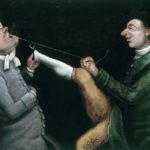