Roger Hampson (1925–1996), painter, printmaker and teacher, was born in Tyldesley, Lancashire, England. He was a member of the group of post-war northern artists who developed the realist tradition established by L. S. Lowry and Harry Rutherford. He took his inspiration from the industrial town in which he lived, surrounded by collieries and dominated by Caleb Wright’s Barnfield MillsFormer complex of six cotton spinning mills, known locally as Caleb Wright's, on either side of Union Street in Tyldesley. . His work documents the people and the decline of industry as the collieries and cotton mills were closed.

Roger Hampson was born in Union Street and moved to Johnson Street when he was three. His father worked for the local building society and sent his son to Leigh Boys Grammar School, expecting him to settle into a similar job. But the Second World War intervened, and Hampson joined the Royal Navy, spending four years on convoy duty on board HMS Garth and HMS Onslow, and taking part in the D-Day landings. In spare moments he drew his shipmates, and encouraged by the ship’s officers, produced satirical daily cartoons about life on board ship.[1]

After the war Hampson enrolled at Manchester School of Art before becoming a teacher. After a brief time teaching in Hereford in the mid-1950s he returned to Manchester, where he worked as a graphic designer. He showed prints and paintings with the Manchester Academy of Fine Arts and was one of the group of artists that included Harold Riley who developed the realist art tradition started by L. S. Lowry. He began to establish himself as a northern artist at his first solo exhibition at Gibbs bookshop in the city centre, where he displayed oil paintings, drawings, lithographs and monoprints.[2] His sketchbooks were filled with rapidly drawn depictions of the people of his home town, drawn in the street, in pubs and on the train.[3]

Hampson died from leukaemia in 1996. A book, Roger Hampson, a Lost Landscape was published to coincide with a retrospective exhibition at the Gallery Oldham in 2009.[4] 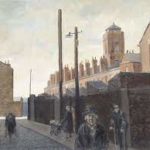 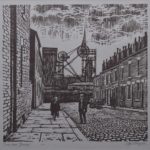 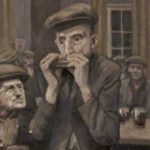 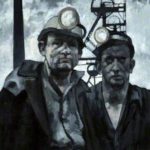 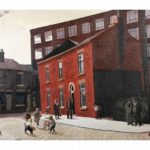 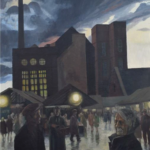 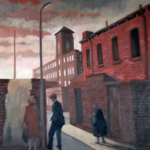 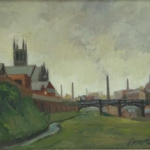 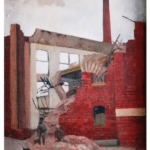