From 1906 until 1920 Valette taught at the Manchester School of Art, during which time he produced his most important work, a series of impressionist views of the city that are now in the collection of the Manchester Art Gallery. Valette returned to France in 1928, where his work has been overlooked, but it is better known in Britain, particularly in Manchester, where he is chiefly remembered as L. S. Lowry’s tutor.

Pierrre Adolphe Valette, son of Ferdinand Jean Baptiste Valette, an armourer and army captain, and Magdelaine Brondel, a seamstress, was born on 13 October 1876 at 28 rue de Roanne, St Étienne, France. Valette was generally known as Adolphe. He studied at L’École Régionale des Arts Industriels in St Étienne from 1891 to 1895. A brilliant pupil, he won prizes for drawing. From 1896 to 1899 he received more artistic awards in Lyons and was awarded a travelling scholarship while studying at the École des Arts Decoratifs, Bordeaux, from 1901 to 1904.[1] When living in Lyon and Bordeaux he worked as an engraver by day and attended classes in the evening.[2]

Valette came to England, possibly to enrol at Birkbeck College in London although no records of him attending survive. He moved to Manchester where he found employment at Norbury, Natzio, a printing company that published illustrations, engravings and books.[2] In November 1905 he was a student in the evenings at the Manchester Municipal School of Art. Impressed with Valette’s skill in drawing, the school encouraged him to apply for the position of Master of Painting and Drawing with a annual salary of £225. He accepted the post on condition that he should “teach the pupils by actually painting with them” an unusual request at the time.[3] In 1906 he joined the staff teaching life drawing and was a popular teacher, knowledgeable and skillful.[1] He encouraged his students to paint outside, just as the Impressionists in France did, and led painting excursions into the city and surrounding countryside. His Open Air Art Class, June 1906, a small painting showing four people sketching in the woods, is an example of such an outing.[3]

Valette’s atmospheric paintings of Manchester are distinctly impressionist. He painted barges on the canals, working outdoors to capture the changing effects of light, cloud and movement. Albert Square, Manchester, 1910 is a snapshot of the sooty town hall under a sombre sky with muted distant buildings suggesting pervading fog. The Albert Memorial, Gladstone’s statue and figures between them form the painting’s middle ground while in the foreground is the darker leaning figure of a man pushing a cart.[2]

Other Manchester paintings include Oxford Road, Manchester in 1910, India House, viewed from the bridge over the River Medlock at Oxford Road, Bailey Bridge, Manchester 1912, and scenes of the Manchester Ship Canal all show his fascination with the atmospheric, polluted industrial climate of the city.[2]

The impressionist influence seen throughout his time in Manchester and on visits to North Wales continued when he returned to France. Rural paintings and pastoral subjects, Le Berger et ses Moutons, Shepherd and Sheep under Tree and Peasants going Home use pastel colours, brush strokes and perspectives reminiscent of Cézanne. His distinctive brushstrokes of one colour against another achieve highlights and modifications of colour and tone.[2]

Valette’s many portraits have a serious quality suggesting personality in typical poses. He painted sensitive portraits of his first wife Gabriela who died in 1917 and son Peter, who died in 1929.[2]

As a teacher, Valette communicated the excitement of impressionism to his students; his most notable, L. S. Lowry said,

I cannot over-estimate the effect on me … of the coming into this drab city of Adolphe Valette, full of French Impressionists, aware of everything that was going on in Paris. He had a freshness … that was a very wonderful thing … I had not seen drawings like these before.[4]

In 1909 Valette married a Brazilian art student, Gabriela Louisa de Bolivar who was his model until her death from tuberculosis in 1917. Their son Peter was born in 1910 but died of tubercular meningitis when he was just 19, a disease that was a common killer in Manchester.[1]

In October 1919 Valette married his second wife, Helena Andrée Pallez, a lecturer in French at Manchester University. In 1920 Valette resigned from the School of Art through illness and, supported by his wife, continued to paint in Manchester until 1928 when he returned to France. His wife preserved much of his work after his death in 1942.[1]

Around 100 works by Valette, many privately owned and others from Manchester City Art Gallery, Salford Art Gallery and Chatsworth were exhibited alongside work by his pupil, Lowry at the The Lowry in Salford Quays in 2011. Curator of the Lowry’s collection, Claire Stewart said: “He brought all this direct knowledge of what artists in France had been doing to Manchester and it invigorated his students. They loved him as a teacher.”[4]

Valette is little known in his native France; a modest man, he did not seek recognition working away from Paris or London. The show’s curator Cécilia Lyon considered that he deserves wider recognition, saying “In his paintings of Manchester he really caught the dynamism, the atmosphere, the pollution, the industry – there is everything in these paintings.” The exhibition was opened by the French ambassador, a sign that the French were beginning to recognise a painter they had overlooked, and who is better known in Britain than in France.[4] 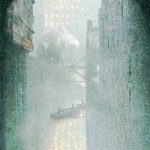 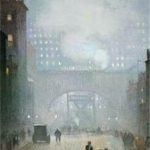 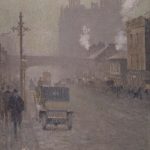