Newes from Scotland is a pamphlet describing the Scottish North Berwick witch trialsSeries of Scottish witch trials held between 1590 and 1593 , detailing the confessions given by the accused witches before King James VI. Printed in London in 1591, at the time the trials were taking place, it was probably written by James Carmichael, the minister of Haddington, who interrogated some of the accused witches and later guided King James in writing his book Daemonologie. The original title of the pamphlet was Newes from Scotland, declaring the damnable life and death of Doctor Fian, a notable sorcerer who was burned at Edenbrough in Ianuary last. The source of virtually the only diagrams available illustrating witchcraft in Scotland from that time, it is the first Scottish or English printed copy purely dedicated to witchcraft in Scotland and provided the first descriptions of the osculum infameRitual of a witch paying homage to the Devil by kissing his genitals, anus or feet. , also known as the kiss of shame or the obscene kiss, to the English population.

Twenty-first century academics have described the Newes as the most propagandistic of the narratives generated concerning the group of trials at North Berwick. A modern 1924 edition of Daemonologie contained a reproduction of the pamphlet.

The pamphlet provides details of the initial events leading up to the trials together with how each of the suspected witches were discovered and captured.

MacCalzean was reputed to have caused the death of her father-in-law, John Moscorp. Sampson’s confession includes details of two hundred witches gathering to meet the Devil with the group then all taking to the sea in individual sieves.[d]This type of unusual conveyance as a means of getting from one point to another is not uncommon in continental witchcraft accounts.[3] Traversing water in a sieve appears to emanate from folklore as it resembles impossible task tales.[4] She recounted tales of dancing, drinking, merriment and the Devil insisting they kiss his buttocks.[e]This is osculum infame, a sign of respect accorded to the Devil; Sampson’s early court documents show she stated “He [the Devil] lifted up his gown and everyone kissed his arse”[5]

It chronicles events leading to the eventual apprehension of Dr. John Fian, who was declared a notable sorcerer. Allegedly the head of the coven, during his examination Fian confessed to be the register of the witches under the service of Satan; later, after he had been returned to his cell, he recanted his pact with Satan and swore to live an honourable Christian life. The following morning Fian claimed Satan visited him during the night to persuade him to uphold his original pact but Fian stated that he renounced Satan to his face. That evening he managed to steal a key to his cell from one of the guards and escaped during the night. He was soon recaptured and again tortured to obtain a fresh testimony as he had denied all his previous confessions. Implements described as used during his interrogation included the boot, which crushed his feet and lower legs, turkas – a type of pincer – and needles to forcibly extract his nails.[6]

The pamphlet includes woodcuts that are almost the only known illustrations of Scottish witchcraft from that period.[7] The number of images displayed in early editions varies; some feature three woodcuts while others include four. The location on pages is also inconsistent.[8] 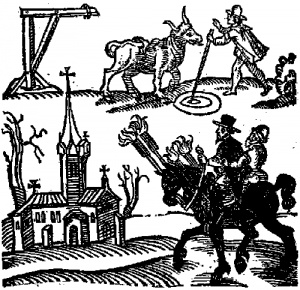 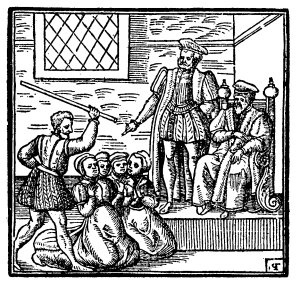 The woodcut is a printers stock piece, also used in an earlier 1579 pamphlet, A Brief Treatise, by Richard Galis. 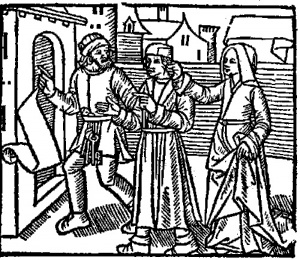 Dr. Fian showing penitence for his wicked life the morning before his escape

Two of the four images used were from the printer’s stock.[9] The woodcut generally assumed to depict four of the witches kneeling before the King first appeared in an English witchcraft pamphlet written by Richard Galis in 1579.[10][f]Entitled A Brief Treatise, the illustration is of the four women Galis alleged were witches. Three men feature in the image: Galis and a seated rich trader together with a medical student who is brandishing a stick above the women’s heads.[10] The other stock image used – depicting a jailor, his prisoner and a woman – has a tentative relevance to part of the text about Fian’s incarceration.[9]

The first known manuscripts bear the title Newes from Scotland, declaring the damnable life and death of doctor Fian. Three different versions of the original exist; a total of six copies of these are known to survive.[11] It was later reproduced several times in a variety of publications, including The Gentleman’s MagazineMonthly compendium of the best news, essays and information from the daily and weekly newspapers, published from 1731 until 1914. in 1779 and Ancient Criminal Trials in Scotland by Robert Pitcairn in 1833.[12] The 1924 edition of Daemonologie includes a copy of it.[13]

All the manuscripts are unsigned, but some versions include a preface directed at the reader, which was probably written by the publisher.[14] James Carmichael, the minister of Haddington, is likely the author of the narrative.[7] His name was first suggested by Sir James Melville in the early seventeenth-century;[15] Carmichael was involved in the examination of some of the accused witches, later guiding King James VI in writing his book Daemonologie.[7] Although most academics and historians of witchcraft cite Carmichael as the most likely candidate to be responsible for penning the narrative and supplying the publisher with copies of the depositions, authors of his biographies do not mention it.[16]

The title page includes the phrase “Published according to the Scottish copy” but no earlier editions survive; according to scholars Lawrence Normand and Gareth Roberts it is unlikely that there was a Scottish version and the words are a reference to Carmichael supplying the original.[17] The spelling used throughout the pamphlet was Anglicised.[18]

Originally produced in late 1591, Newes from Scotland was the earliest Scottish or English printed document dedicated to exclusively covering witchcraft in Scotland.[19] Tailored specifically for an English audience,[20] it provided the first descriptions of the osculum infameRitual of a witch paying homage to the Devil by kissing his genitals, anus or feet. , also known as the kiss of shame or the obscene kiss, to the English population.[21]

Historians Lizanne Henderson and Edward Cowan describe the pamphlet as including “a good dose of titillation and gruesome detail”;[22] Normand and Roberts reach a similar observation finding it “far more colourful, sensational and violent than sixteenth-century English pamphlets printed after the apprehension and arraignment of witches.”[19] Twenty-first-century academics such as Peter G. Maxwell-Stuart define the pamphlet as propaganda;[23] it sought to enhance the King’s blossoming status as a detector of witchcraft and endorse his belief he was a “godly king”.[22] A myriad of literature was produced about the North Berwick witch trials, but Normand and Roberts classify Newes from Scotland as the “most propagandistic.”[19]